Welcome to the Air Data Program

We believe the passion of our citizens can change the world.

Our mission is to support and encourage them.

The Air Data Program is originally an initiative from the University of Stuttgart and the OK Lab Stuttgart which is part of the program Code for Germany of the Open Knowledge Foundation Germany and was founded in 2015. EDSP ECO has adopted the program, enrolled their concept in several cities in the Netherlands and we incorporated it in our Environmental Data Monitor Platform.

The aim of the program is to promote development in the areas of transparency, Open Data and Citizen Science. Regional groups consisting of designers, developers, journalists and others meet regularly in Labs. They develop apps that inform, positively shape and support society and make the work of administrations and authorities more transparent. The city of the future belongs to its citizens. The digital tools, the Maker Movement and Citizen Science are leading to more and more people being given the opportunity to design the city themselves. 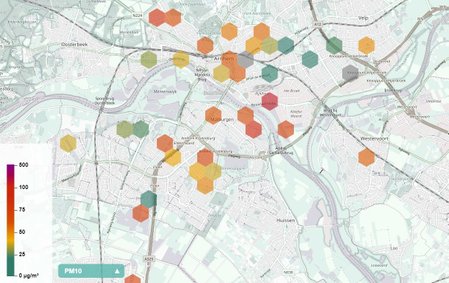 The particulate matter limits ​​are regularly exceeded. In our town the air pollution causes 13 months of premature deaths on average and 9 months are related to (ultra) particulate matter. The following questions come to mind:

We answer these and other questions by building & deploying fine dust sensors measuring PM10 and PM2.5 particles, combined with sensors for temperature and moist values and visualizing the data in an overall picture in the Air Data Map.

We combine the different data sources from our other Environmental Data Projects to offer custom views in the Environmental Data Monitor Application (EDMA) to inform you and provide city council and the Government Environmental Services with the required data to form policy in support of better air quality.

The Air Data Program is on the verge of adding two new sensors which greatly enhances the scope of the project. The NO2 Sensor is currently being tested and will be added by the end of 2020. Our Air Data team members are preparing for the pilot deployment in the Netherlands.

Breathing air with a high concentration of NO2 can irritate airways in the human respiratory system. Such exposures over short periods can aggravate respiratory diseases, particularly asthma, leading to respiratory symptoms, hospital admissions and visits to emergency rooms. Longer exposures to elevated concentrations of NO2 may contribute to the development of asthma and potentially increase susceptibility to respiratory infections.

NO2 is a dangerous pollutant in and of itself and also contributes to the formation of PM2.5 and ozone, two of the most dangerous forms of air pollution. In the EU alone, cleaning up NO2 pollution could save up to 75,000 lives per year.

At least one million healthy years of life are lost each year in Europe alone due to noise pollution (and this figure does not include noise from industrial workplaces). The World Health Organization concluded ‘there is overwhelming evidence that exposure to environmental noise has adverse effects on the health of the population’ and ranked traffic noise second among environmental threats to public health, the first being air pollution.